IRVINE, Calif. (June 28, 2016) – Girl Scouts of Orange County has announced its roster of 2016 Celebrate Leadership honorees, seven extraordinary local female leaders who are Girl Scout alumnae and champions of Girl Scouting. The women will be recognized at the organization’s Seventh Annual Celebrate Leadership event on November 4, 2016 at the Island Hotel in Newport Beach.  Each Celebrate Leadership Honoree will be paired with a current Girl Scout, ranging from Daisy (kindergarten) to Ambassador (grades 11-12), providing the leaders of tomorrow with an opportunity to connect with leaders of today.

Ellen S. Bancroft of Coto de Caza and Office Managing Partner of the Orange County office of  global law firm, Morgan Lewis & Bockius LLP, has more than 25 years’ experience in corporate transactions, including venture capital and private equity financings, public offerings, and mergers and acquisitions. Bancroft is a leading Southern California corporate attorney, having closed more than 70 public and private acquisitions and advised clients in more than 50 registered public offerings.  She is an active member of the UCI CEO Roundtable, serves on the board of Big Brothers Big Sisters of Orange County and has received numerous awards, including the Corporate America Legal Elite “IPO Lawyer of the Year – California” in 2015 and inclusion among Best Lawyers “Women Lawyers of the Year” in 2016.  A former Girl Scout Brownie, Bancroft is a past member of Girl Scouts of Orange County’s Celebrate Leadership committee.

Karen Caplan, of Seal Beach, is president and CEO of Frieda’s Specialty Produce. The first-born daughter of founder Dr. Frieda Caplan, she has worked with produce since age 10. After earning a degree in Agricultural Economics and Business Management, Caplan joined Frieda’s Specialty Produce full time in 1978. She was promoted to President and CEO in 1986 and in 1990 she and her sister Jackie Caplan Wiggins purchased the company from their mother. Caplan has held numerous board and leadership positions and was the first female chairperson of the national trade organization United Fresh Produce Association and first female president of southern California-based Fresh Produce & Floral Council. In 2015, she was named Women in Produce honoree and received Cal Poly Pomona’s Jim Hicks Agricultural Achievement Award in 2016. Karen, a proud Girl Scout alumna, credits her sales success to being a top cookie seller in her Brownie and Cadette troops.

Jackie Caplan Wiggins, of Long Beach, is vice president and COO of Frieda’s Specialty Produce. Growing up, she worked in her family’s produce business and was officially hired at age 25 in sales, supporting buyers at the Los Angeles Wholesale Market and retailers across the country. Wiggins was soon handling Frieda’s key accounts and was promoted to Chief Operating Officer in 2012. She is a member of the United Fresh Produce Association Wholesaler Distributor Board, past-chair of the Parent and Family Advisory Council for California Polytechnic State University, San Luis Obispo, and served on the board of United Fresh Produce Association’s Educational Foundation.  A breast cancer survivor and mentor to women, she was recently honored by the Long Beach Cancer League at its annual American Cancer Society gala. As a Brownie and Cadette, Jackie enjoyed earning badges and fondly remembers camping with other Girl Scout troops.

Lucy Dunn, of Coto de Caza, is president and CEO of the Orange County Business Council (OCBC), leading a dynamic organization of business members and working with academia and government to assure OC’s economic prosperity and high quality of life.  Previously, Lucy served as Director of the California Department of Housing and Community Development and was appointed to the California Transportation Commission in 2008 by Governor Schwarzenegger, reappointed by Governor Brown, and elected its chair in 2015. She serves on numerous associations, including the California Economic Summit, Pacific Symphony, and UCI Foundation.  Dunn is an attorney admitted to practice before the California State Bar, federal bar, and U.S. Supreme Court. Her accolades include Orange County Business Journal’s “Women in Business” award and twice being named “Woman of the Year” by the California Legislature. Dunn, an avid Girl Scout supporter, is proud to include Girl Scouts of Orange County among OCBC’s membership.

Mary “Muff” Tennyson, of Newport Beach, is CEO and founder of StashAll® LLC and a retired financial software industry veteran. In addition to 20 years with Xerox and Unitronix, Tennyson was owner and president of business system consulting company Basix Business Solutions, Inc., which she sold in 2000. Inspired by the needs of her 94 year old mother, she launched StashAll® in 2000 to design and manufacture stylish handbags for mobility devices. Tennyson has dedicated herself to the non-profit community, serving on numerous boards, including 25 years with the Assistance League of Newport-Mesa, a founding member of the Women’s Philanthropy Fund of the Orange County United Way, and member of Girl Scouts of Orange County’s Celebrate Leadership Committee.  Tennyson comes from a Girl Scout family, with her mother, herself, and her daughters all Girl Scouts. Tennyson earned her Curved Bar, equivalent to today’s Gold Award-- the highest honor in Girl Scouting, in 1959.

Socorro Vasquez, of Laguna Beach, is a long time community volunteer and philanthropist dedicated to bringing arts education to Orange County youth. As an emeritus board member of South Coast Repertory, Vasquez continues to provide opportunities for children to experience Theater for Young Audiences. She was also an early supporter of The Wooden Floor, a dance program for underserved youth, and developed the very successful concert receptions, which highlight the program’s mission. Vasquez served on the University of California, Irvine – Dean’s Advisory Board for Claire Trevor School of the Arts, is a past Board Member of the Smithsonian Latino Center, and a past board member and ongoing supporter of the Orange County Community Foundation, through which she and her husband were founding members of the Orange County Hispanic Education Endowment Fund. Her connection to Girl Scouts began in grammar school and continued as leader of her daughter’s troop and enthusiastic supporter of her granddaughter’s Junior Troop 2534.

Kelly Vlahakis-Hanks, of Huntington Beach, is president and CEO of Earth Friendly Products (EFP), award-winning manufacturer of ECOS Laundry Detergent and over 200 other environmentally friendly cleaners. She oversees four carbon neutral, Zero Waste manufacturing facilities across the U.S. and a global sales team. Under her leadership, EFP achieved carbon neutrality at all its manufacturing facilities and implemented one of the strongest employee benefits programs in the nation, with one of the highest living wages in the U.S. Vlahakis-Hanks was named “Entrepreneur of the Year” by the Orange County Global Women’s Conference in 2014 and received the Orange County Business Journal’s Women in Business Award in 2016. She is an active member of several boards, including the American Sustainable Business Council, Environmental Media Association and Grades of Green.  A former Girl Scout, Vlahakis-Hanks continues her involvement through her daughter and has hosted troop events at EFP, providing opportunities for girls to earn badges and learn about environmental sustainability.

Commenting on this year’s impressive assembly of honorees, Nancy Nygren, chief executive officer of Girl Scouts of Orange County, shared, “As we commemorate the 100th anniversary of the Gold Award, Girl Scouts’ highest award and a symbol of excellence and leadership, it’s fitting that we also celebrate an extraordinary cadre of Celebrate Leadership honorees this year who embody the very essence of the Girl Scout Gold Award through their dedication to empowering and bettering themselves while making the world a better place for others.

Girl Scouts of Orange County’s Seventh Annual Celebrate Leadership event is chaired by Shannon Kennedy, President, US Markets- Southwest for BNY Mellon Wealth Management, and Ashleigh Aitken of Counsel at Aitken* Aitken* Cohn.  This signature event will host over 400 of Orange County’s community and business leaders for an evening of inspiration, dinner, auctions, and surprises.  Funds raised will support leadership development programs for more than 21,000 Orange County Girl Scouts and more than 10,000 dedicated Girl Scout volunteers who guide them to lead their best lives.

We are the Girl Scouts of Orange County.  We’re 36,000 strong— more than 21,000 girls and nearly 15,000 adults who believe every girl can change the world. Girl Scouts began over 100 years ago with one woman, Juliette Gordon “Daisy” Low, who believed` in the power of every girl. Today, we continue her vision of building girls of courage, confidence, and character who make the world a better place by helping them discover their inner strength, passions, and talents. And with programs in every zip code in Orange County, there’s a chance for every girl to do something amazing. We’re the Girl Scouts. To volunteer, reconnect, donate, or join, visit www.GirlScoutsOC.org. 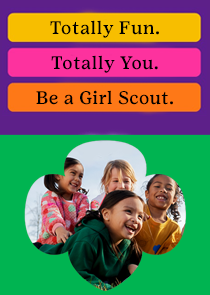